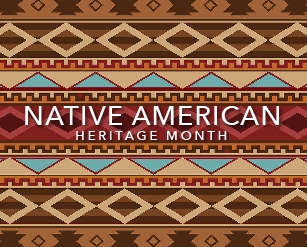 Most of our ancestors immigrated to the United States for new opportunities. And when the earliest explorers arrived centuries ago, they found Indigenous People living on the land.

For nearly one hundred years, both Indian and non-Indian Americans have urged the nation to designate a special place on the calendar to honor the achievements, sacrifices, and cultural and historical legacy of the original inhabitants of the lands that make up the United States and their descendants: the American Indian and Alaska Native people.

US Interior Secretary Deb Haaland, the first Native American to hold a cabinet post, kicked off the month in a video address highlighting some of the work the U.S. Department of Interior continues to do for Native Americans, Alaska Natives, Native Hawaiians, and Island communities. “Native American history is American history and it’s only by recognizing that history that we can build a future that is equitable and inclusive,” said Haaland.

Today there are 574 federally recognized tribes within the US, according to the Bureau of Indian Affairs, and each tribe has its own culture and traditions. From the 2020 census, there are 6.9 million American Indians and Alaska Natives making up approximately two percent of the U.S. population. Fifteen states have over 100,000 Native Americans in their population and 15 states have less than 1% of Native Americans. Alaska has the highest relative population of Native Americans, who make up 19.74% of the state's total population, about 146,000 people.

People have lived in what’s now California and Baja California for almost 20,000 years. Because the landscape has so many different habitats - rainy redwood forests; snow-capped Sierra Nevada Mountains; Central Valley farmlands; the Mojave Desert; and the Pacific Ocean coastline - the ancient people who settled here split into hundreds of smaller groups, each developing their own culture and lifestyle. The more than 500 tribes that lived in this region developed very different cultures from one another.

Today there are 109 federally recognized tribes in California which is home to over 750,000 Native Americans, the largest Native American population of any state.

Archaeologists believe that the ancestors of today's Native Americans came to North America from Siberia, entering the Puget Sound region as the glaciers of the last ice age receded. Evidence of continuing human habitation in the area from 12,000 years ago indicates that the present tribes of Puget Sound have lived here at least that long, and possibly several thousand years before that. The original citizens of what is now Western Washington gained their identity by developing a way of life closely fitted to the resources of the maritime and river valley Northwest.

There are 29 federally recognized Indian tribes in Washington today. And with over 200,000 people identified as American Indian/Alaska Native, Washington state's Native American population is tenth largest in the nation.

You’ll notice many different names used for Indigenous People in the United States. American Indian, Indian, Native American, or Native are acceptable and often used interchangeably; however, Native Peoples often have individual preferences on how they would like to be addressed. To find out which term is best, ask the person or group which term they prefer. When talking about Native groups or people, use the terminology the members of the community use to describe themselves collectively.

We honor the history, achievements and contributions of Native Americans this month and every month.